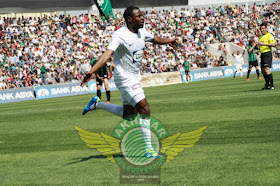 Definitely, all eyes will be on Nigerian Born forward, Sani Gideon Adinoy who recently made history with his club Akhisar Belediyespor in Turkey.

The 22year old was a star performer for his club in the just concluded 2011/2012 season where they finished as league champios and have gained promotion for the first time in the history of the club from second division to play in the Super Lig next season.

He moved from an amateur side Izmirspor where he made a hundred percentage record scoring 3 goals in the 3 games he featured for the club before he was spotted by the Second Division side Akhisar Belediyespor.

Sani who only joined Akhisar Belediyespor in the mid of 2011/2012 season scored 3 goals in 14 appearances for the club.
He however joins the likes of Super Eagles Captain Joseph Yobo, Ekigho Ehiosun, Michael Eneramor and a host of other Nigerians plying their trade in the Turkish top flight League.